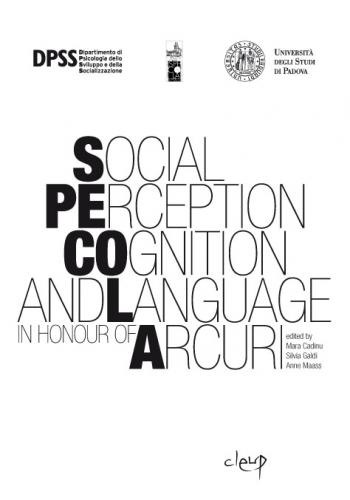 Social Perception Cognition and Language in Honour of Arcuri

Tags   #
On the 20th of May 2011, a group of friends, colleagues and ex-students met at the Psychology Faculty of the University of Padova. The occasion: to celebrate Luciano Arcuri with discussions on social cognition, social perception, and language. The present volume presents parts of that discussion.

Dedicating a Festschrift to Luciano Arcuri has been a Fest indeed. A Fest celebrated with many friends and colleagues who have written chapters on their research endeavors, often including personal recollections, to honour a great mentor, an international colleague, and a companion of the checkered paths of Italian social psychology.
In the 70's, the way in which Luciano started to conduct experimental research strongly affected the subsequent development of social psychology in Italy. He was a pioneer of the social cognition approach in Italy and trained generations of students, some of whom obtained their Ph.D.'s under his supervision, others who completed their studies abroad, in Europe or in the United States. There is no doubt that the most innovative aspect of his career has been his strong tie with the international research community. As an active member of the European Association of Social Psychology, for which he also served in the Executive Committee from 1990 to 1996 and for which he organized the Padova Summer School in 2006, Europe has always been his solid point of reference. Indeed, the chapter 'On Angels and Daemons – Or – Whom did the Bartender serve the Espresso to and whom the Cappuccino?' witnesses Luciano's collaboration and friendship with Gün Semin, that was further developed through their mutual effort in building the European Social Cognition Network (ESCON).
But Europe has not been Luciano's only horizon. In 1987, a sabbatical in the United States, at the University of Oregon, consolidated his friendship with Mick Rothbart, and opened the way to other relationships with American social psychologists, reflected in the Festschrift chapters by Jim Sherman, who has contributed a piece with Percy and Mata on the relation between language and thought, and by Dave Hamilton, who presents a piece, together with Ko and Chen, on the formation of group impressions. More recently, his relationships with North America have been intensified via the collaboration with Bertram Gawronski, who walks us through, with Silvia Galdi, the use of implicit measures to study undecided voters, a work that culminated in 2008 with its publication by Galdi, Arcuri and Gawronski in Science. Starting in the early Nineties, Luciano extended his collaborations 'down-under', as illustrated by Drew Nesdale's contribution concerning the development of intergroup attitudes.
Luciano's role in the European tradition was not an individualistic experience at the expense of Italian social psychology. On the contrary, international research was constantly communicated and discussed with the Italian community of social psychologists, many of whom became involved, together with Luciano, in the steadily growing European Association of Social Psychology. Among them are Augusto Palmonari (University of Bologna), companion of many Italian and European adventures, and Lucia Mannetti (University of Rome), whose chapter with Brizi explores the role of the need for cognitive closure on attitudes under uncertainty. Other Italian colleagues and friends are Paolo Legrenzi and Massimo Girotto (IUAV of Venice), who investigates the relation between problem solving and social psychology. A contribution by Ino D'Arcais at the University of Padova complements these research chapters by telling us the story of Luciano as a scientist and a person.
Numerous are the contributions from Luciano's ex-students. Vanda Zammuner, his first student, explores the sharing of emotions, Remo Job (University of Trento) investigates word recognition together with Treccani and Mulatti, Vittorio Girotto discusses the role effects in counterfactual thinking, Giuseppe Pantaleo takes us from familiarity to 'Multiple perspectives', Luigi Castelli discusses the development of intergroup attitudes, Cristina Zogmaister explores the implicit-explicit attitude inconsistency, Silvia Galdi, his last Ph.D. student, writes about the development of Stereotype Threat whereas Mara Cadinu has edited this Festschrift together with Silvia Galdi and Luciano's ever-lasting friend Anne Maass.
Many other colleagues from all over Italy have contributed to this Festschrift, including Antonio Aiello, Giovanni Briante, Patrizia Catellani, Norma De Piccoli, Dino Giovannini, Bruno Mazzara, Grazia Monaci and Rosanna Trentin, Cristina Mosso, Angelica Mucchi-Faina, Stefano Pagliaro, Marco Perugini, Marcella Ravenna, Monica Rubini, Camencita Serino and Chiara Volpato. Contributing colleagues from other European countries include Francesco Foroni from the University of Amsterdam, and friend and colleague Fabrizio Butera from the University of Lausanne, who also represents the European Association Executive Committee in consigning the Career Award from the European Association of Social Psychology. In addition, other colleagues from the University of Padova, to which Luciano dedicated a career of institutional service, have contributed to this Festschrift. Among them are Dora Capozza, Alberta Contarello, Daniela Di Riso, Anna Maria Manganelli, Chiara Verzeletti and Alberto Voci.
Last, but not least, an important part of this book is dedicated to Luciano by his friends from SPECOLA, an institution that is located half way between a laboratory and a family. Among them are Andrea Carnaghi, who shared with Luciano, Anne Maass and others the Allport Prize for best paper in 2008, Mara Cadinu, Luciana Carraro, Luigi Castelli, Fabio Fasoli, Silvia Galdi, Giovanni Galfano, Marcella Latrofa, Anne Maass, Maria Paola Paladino, Giulia Pavan, Tiziana Pozzoli, Elisa Puvia, Caterina Suitner, Rosanna Trentin, and Jeroen Vaes. It is through them that the Fest continues celebrating Luciano Arcuri through scientific research and ever-lasting friendship.