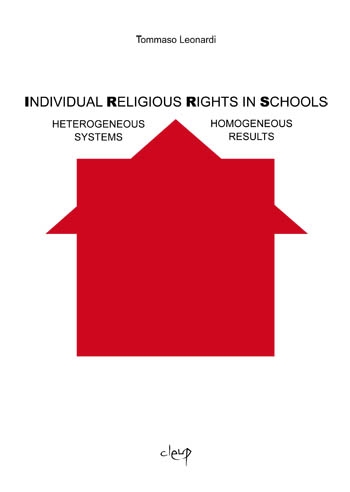 Tags   #
Religious and philosophical convictions are, and have been, among the most destabilising issues. Their protection and regulation in the educational arena has emerged as a necessity after the Second World War.
This book wishes to offer an overview of juridical regulation and protection of these freedoms, and to investigate who is the right holder. The International legal framework will be taken as emblematic of the maximum neutrality, and it will confront with two complex and diverse Constitutional systems: the Italian and the United States'. All inconsistencies and (il)logical structures that arise in the national frameworks will be underlined and entwined with the outcomes of the International framework that could, or should affect the concrete rights balancing.
In its development the book tries to recollect the legal disciplines, in all the systems analysed, and to pinpoint how they lack a sufficient normative strength in most of their parts, leaving a great amount of discretionality to the interpreter. A margin wide enough to create a permanently unstable system in its constitutional adjudication and allows solutions, which will conform to the majority's will, or to the sentiment of the political elites but will often be largely unpredictable. The Author tries to pinpoint other possible different rights balancing within compulsory education, and how far religions and philosophical convictions can be protected without falling into State sponsorship of indoctrination or into State supported censorship and ignorance. Moreover, a great number of similarities between the outcomes of rather different systems will emerge, and the importance of the international law framework in shaping the concrete protection will be redefined.
To conclude the Author try to assess whether there is convergence toward a determinate model, and, if so, why.

Autore
Tommaso Leonardi, Ph.D., is born in Vicenza in 1979. He studied Law at the University of Trento, and at the Uppsala University as an Erasmus program student. During his Ph.D., in the academic year 2007-2008, he took part in the Visiting Researcher-Visiting Scholar program at Harvard Law where he had the supervision of Prof. Jacqueline Bhabha. From the year 2008/2009 he is contract professor of Public Law for the University of Padua, History Department. From 2009 to 2010 he has been director, and policy coordinator, of an association of European Regions, the Conference of European Legislative Assemblies.