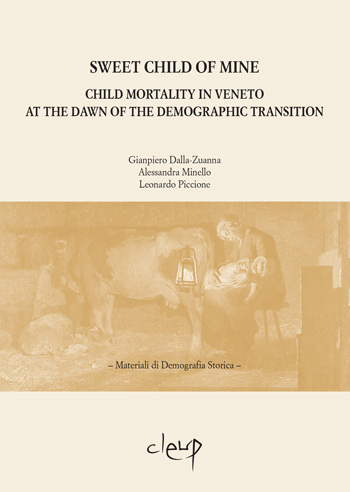 Sweet child of mine

Child mortality in Veneto at the dawn of the demographic transition

This book focuses on child mortality, and mainly on infant and neonatal mortality, during the 19th century in Veneto, Northeastern Italy. In this region the levels of infant mortality during the period 1750-1850 are among the highest ever recorded for a large area over a long period. This peculiar characteristic is mainly due to the exceptionally high neonatal winter mortality. Following this period, however, infant mortality steadily began to decline. The Department of Statistics of the University of Padova has developed the project CHILD (Collecting Hasbugical Information on Life and Death), recording nominative data on births and deaths in the age 0-4 years in 46 parishes of the Central Veneto (provinces of Venice, Padova, Treviso, Vicenza and Verona). CHILD is based on the Habsburg registers, compiled by the priests between 1816 and 1870. The availability of data on 152,000 births and 62,000 deaths, linked using nominative keys, allowed to carry out a careful study on mortality in the first five years of life, pushing the differential analysis to a degree of consistency not feasible for small communities. One of the main results of the book is that during the first two observed decades (1816-35), neonatal mortality remains high, and differences in mortality according to socioeconomic status are modest and not systematic. In the 1840s, however, survival in the first year of life (but not for ages 1-4) began to increase. Mortality first started to decline among the richest families and in cities, later spreading among the peasants of rural villages.

Gianpiero Dalla-Zuanna is Professor of Demography at the University of Padova, Italy. He is the founder of the CHILD project (Collecting Hasburgical Information about Life and Death). He has several publications on historical demography of Veneto and Italy.
Alessandra Minello has a PhD in Sociology and works as Research Fellow at the European University Institute in Florence. She has been working on the CHILD project since 2008, organizing all the phases of the data collection and analysis.
Leonardo Piccione received his PhD in Statistics at the University of Padova, with a thesis titled “Children Survival in Veneto 1815-70. From the Dark Age to the Dawn of Change”. He is the main responsible for the harmonization of the data-set and massively contributed to the analyses of this book.
This book also contains contributions by Guido Alfani, Michel Oris, Adriano Paggiaro, and Andrea Zannini.